TCEC Cup in the next days! 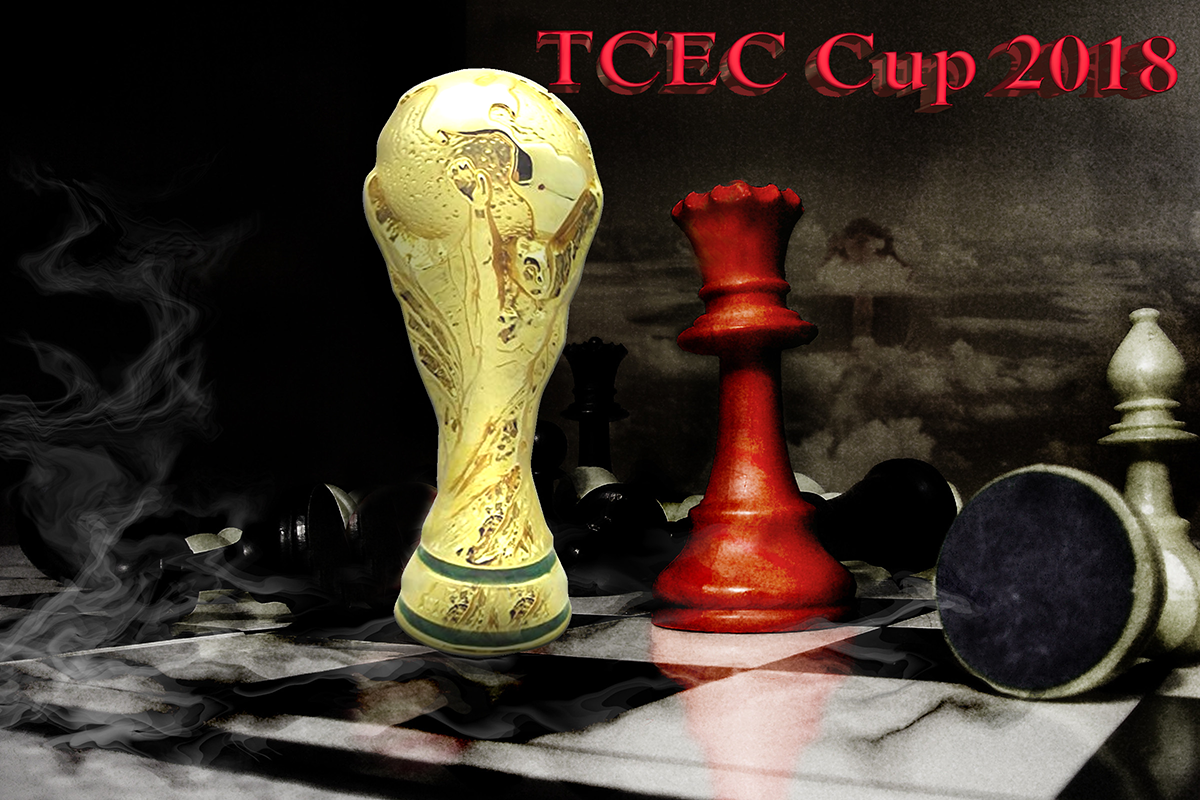 The TCEC(Top Chess Engine Championship) tournament is currently running with engines playing in the premier division and this division will finish in a few days. But this time, after premier division end, there would not be an immediate starting of the superfinal between the top 2 placed engines in premier, but a new tournament is going to happen that Chessdom has announced, the TCEC CUP , with all engines of TCEC but in a different format, that of knockout games, one that brings in mind the traditional Cup competitions of football.
(TCEC superfinal will he held after the TCEC Cup of course)

So the 32 engines of season 13 of TCEC will participate and the pairs will be according to their places that had in the current 13th season. That means 1st engine in premier will play against 8th placed engine in 4th division, 2nd premier engines will play against 7th placed engines in 4th division, etc….
Each pair will will play 8 games , 4 with black and 4 with white with 4 predefined positions with reversed colors.
After 8 games are complete the engine with higher points will promote to next round.
In case of a tie after 8 games, 2 more games(1 with black and 1 with white for each engines) will be played to determine the winner(the one who will score more points). In case of a tie another 2 games will be played and so on, until an engine wins the 2-game tiebreak.

Obviously with 32 engines there would be a round of 32, then a round of 16, then the quarter-finals, then semi-finals and at the end the final.

All games will be played with time control of 30 minutes plus 10 second per move increment with pondering off.
Hardware for traditional engines will be 43 cores(2 x Intel Xeon E5 2699) while for the 2 neural net engines(Leela and DeusX) it would be 2x Tesla V100 GPUs provided by Google.

These are the current pairings and a probable, according to how Football and Basketball competitions are being run, format between the pairings. But only the round of 32 pairings holds as per the TCEC announcement, since they may choose different match ups for the next rounds. 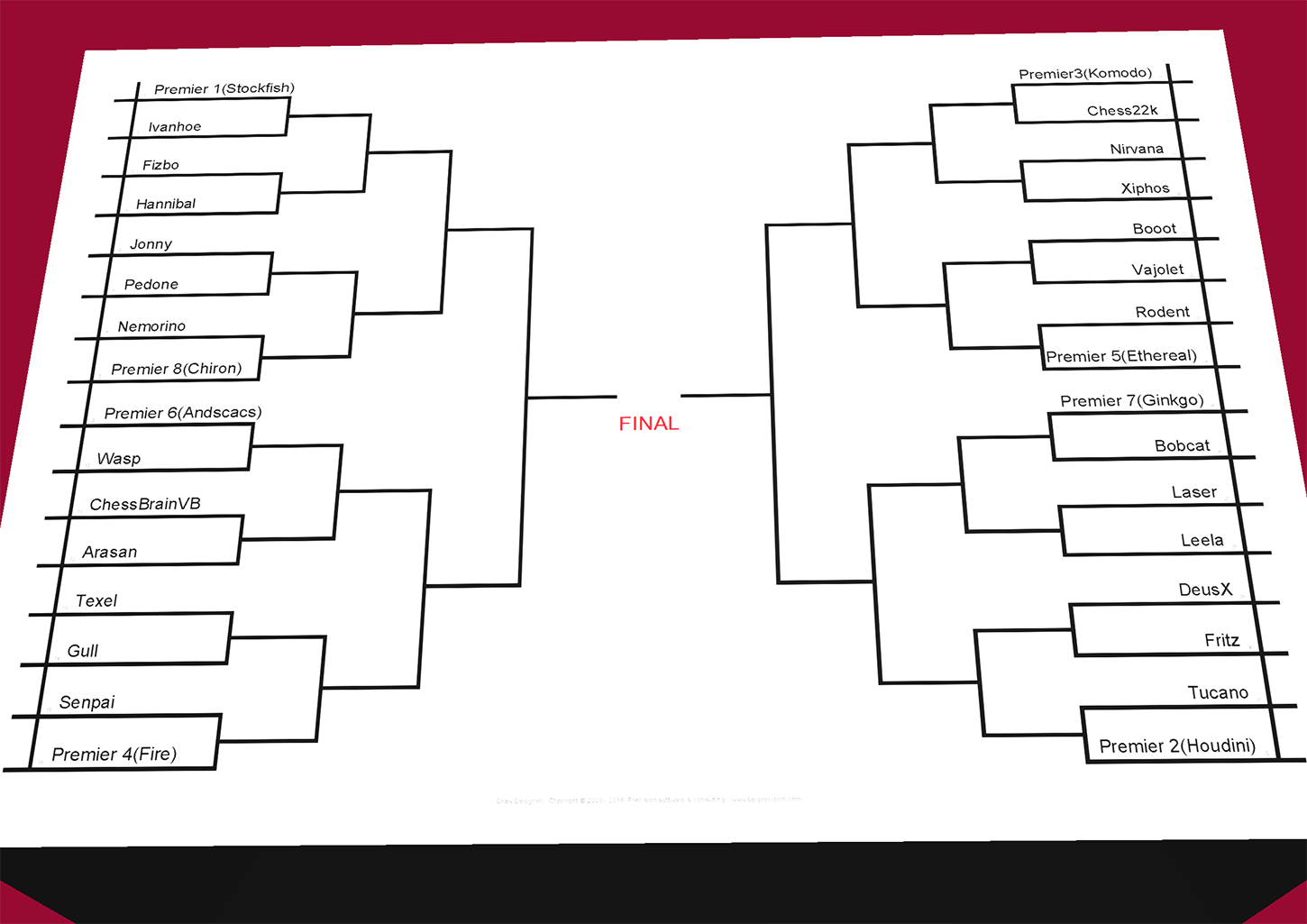 So Leela will have to face Laser in the TCEC Cup in 8 games. The odds should be with her and she should promote as she is stronger than Laser but we will see…..

Knowing that premier division is running and Leela is not participating as she got stuck in 3rd division due to the known issues with overheating problems because of the hardware, TCEC had been running various bonus games with most time Leela participating.
And in these bonus games Leela has so far a fantastic performance against the mighty Stockfish development version(dev) with 43 cores or even more!

Right now Stockfish on premier division has 21 wins, 1 loss and 25 draws in 47 games.
That means a +158 ±67 Elo average performance and that Stockfish has won 45 % of its games against the other premier engines.

This must be due to Leela is still having many blind spots resulting in blunders from time to time mostly in endgame and mainly because of her ineffectiveness in many occasions in the endgame, not being able to convert a better or even winning position.
Blunders with equal distribution occurrence against weak or strong engines, cost her much more Elo against weaker opposition. Also not being able to convert in endgame her advantage against weaker engines costs her again much more Elo than when playing against stronger opponents. It’s obvious from her current playing that in opening and middlegame she can hold her own against Stockfish and she is probably even be better(except tactical shots of course that Stockfish is out of this world), but when it comes to endgame she loses a whole lot of her strength, with many misevaluations and incorrect play compared to top 20 engines. This is mainly because her puct search is not able to compete against AlphaBeta search that is extremely efficient to resolve positions especially with few pieces like we have in endgames. But this happens of course also due to not optimal evaluation in many endgames. So more training is needed to improve all these and even better training techniques that are currently tried in test 30.
For more about that curiosity of Leela one can read HERE!

Leela’s only win against Stockfish dev 43 cores in TCEC bonus games. Stockfish was blind to the g4->g5->g6 march of Pawn.